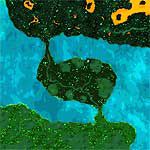 Some months ago, an island was lifted by an earthquake from the bottom of the sea, joining two opposite shores held by former enemies with a narrow isthmus. The new land, rich in resources, became disputed at once, and the feud that calmed down several years ago now flared up with renewed force. (remake map of the heroes 5). (by mr.budilnik, aka feidet)