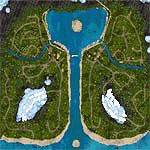 Once the southern end of Tamriel was united and the Shantiri preserved their knowledge and resources in the Valley of Wisdom. 200 years ago sailed a prince of necromancy to the Cape. The Shantiri were impressed by his magical abilities and fell him. Blind to merge their magic with necromancy with zeal, no one noticed the real intentions of the Necromancer. He was concerned only about the treasures and the advantage of the secluded valley. He received eight a dispute between the western and eastern cities of the cape. Both parties gave a spell in hand which should destroy the opposition in one fell swoop. The warring parties spoke out their charm and the choas began. A massive earthquake left the valley drop so far to the sea water flooded the gorge and only the Temple of Shatiri as an island can be reached in a new lagoon. The Prince of necromancy retreated into the caves below the temple and seemed impossible for any challenger. Both warring parties had to reach the ground and destroy the princes if they want to carry out her mission to bring southern kingdom again under one banner.(by ZINI)