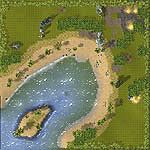 Over five decades ago, Hopedale Bay was a small but fairly busy trading port. Ships from all over the world would stop here and trade cargo. That was until operations had been seized do to poor levels of security. This lead to many ships wanting to avoid the port due to fear of robbery. As a result, many ships would drop anchor off the coast of the small island at the entrance to the bay known as "Pear Island". This became a small trading community which quickly deteriorated. As the civilian population decreased on the main land, monsters started to populate the lands. The beaches were also no longer safe. Two factions setup castles to fight for the land and bring it back to it's old glory. Two factions fight for control over a bay area.(by Fatespinner)