The battle of wills 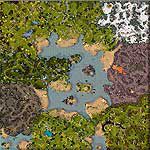 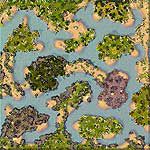 A long time ago lived eight friends together in harmonie and freedem in a fertile country. Over the last one hundred jears the friends distanced themselves from each other and went their one way. The friends became foreigners. They realized soon that they can not live longer together peacefully, because of mistrust and afraid of each other. They agree that there is in future only one place in this country for one hero. Let the battle of wills begin!